Advertising is crucial to the success of Southeast Michigan business owners. According to Investopedia, "lack of adequate marketing and publicity are among the issues that drag down small business".

According to Borrell Associates, a company that tracks advertising trends across the country, Detroit business owners are expected to spend $2 billion to advertise the goods and services they sell. This represents an 8.0% increase versus last year. 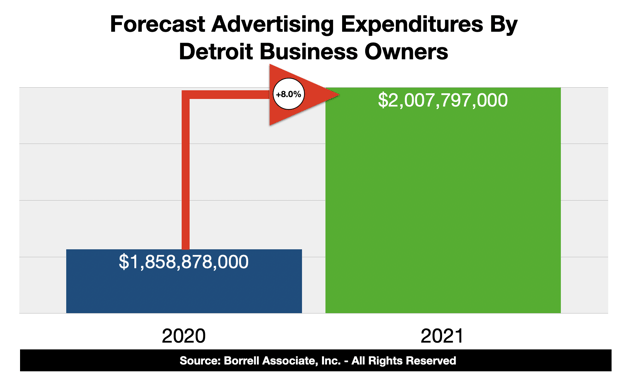 The majority of these dollars are being spent by Detroit business owners to capture a significant share of the $63 billion dollars local consumers will be spending this year. These estimates are based on a revised forecast from the National Retail Federation (NRF).

Of course, there is an over-abundance of ways a local business owner can advertise. Perhaps the best way to generate sales from local consumers is with Detroit radio. Here are the top five reasons why...

Every week, according to Nielsen, significantly more local consumers are reached by Detroit radio than with any other advertising medium. This includes TV, cable, social media, streaming audio or video, and newspaper. 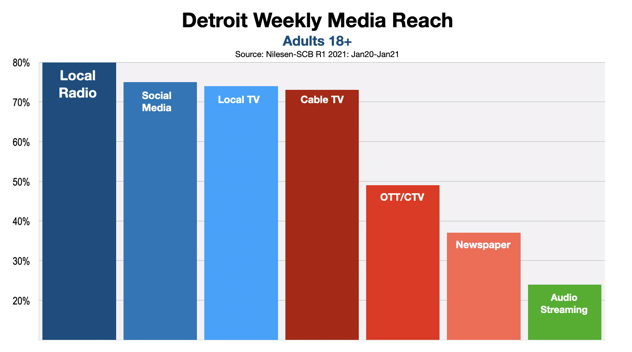 Reach, according to Nielsen, contributes more to the success of a radio campaign than all other media considerations. Only the message itself has a greater effect.

Millennials were the first demographic group to be completely comfortable accessing digital and technology media including streaming audio, streaming video, and social media. But, despite an abundance of options, Detroit radio reaches more millennials every week than other choices. 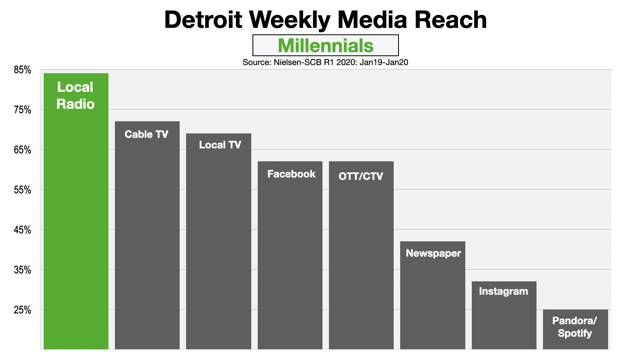 Before the pandemic, consumers spent about two hours per day tuned to Detroit radio station.  Most of this time spent listening (TSL) happened at work or in the car. Then in March 2000, to help slow the spread of the Coronavirus, consumers spent less time on the road and at the workplace.

This shift in lifestyle,  however, had little effect on the amount of time consumers spend listening to local radio stations.

Although the time consumers spend listening to Detroit radio has remained little changed throughout the pandemic, where people listen has evolved to match lifestyle changes. 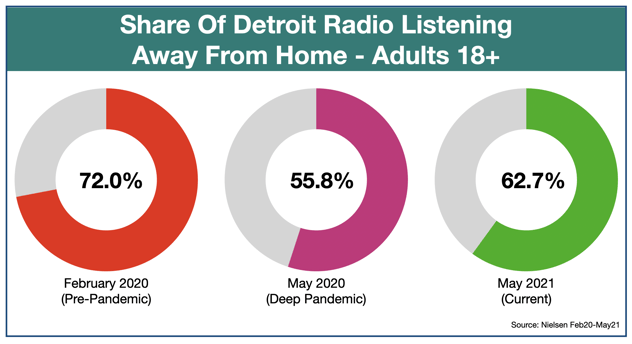 Here is the bottom line of this study. The retailer earned a $28,000 increase in sales for every $1000 spent. A 28-to-1 return-on-advertising-investment.

Who Listens To Commercials

A 2011 Nielsen study discovered that, on average, 93% of listeners stayed with the radio station they are tuned to when the commercials come on. That number amazed many advertisers at the time who believed that audiences were far more likely to defect when the music stopped. 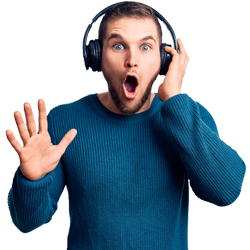 A lot has changed since 2011. Detroit area consumers have many more media options and can instantly connect to each with a button-push, mouse-click, screen-tap, or voice command. With all of these choices, do radio audiences still stay tuned during commercial breaks?

A study conducted this year by Edison Research and NPR found that 50% of consumers who were exposed to radio commercials indicated that they were compelled to gather more information about a company, product, or service. Thirty-six percent of listeners said they were convinced to buy a product after hearing a radio commercial