Does Anyone Listen To Detroit Radio At Night?

Each week, according to Nielsen, more than 3.1 million adult consumers tune-in to a Detroit radio station. This is significantly more than watch local TV or cable. More than stream video channels like Netflix or Hulu. More than read local newspapers. More than use Facebook or Instagram. More than listen to online audio services like Pandora and Spotify.

But almost everyone knows (including many who advertise on Detroit radio) that consumers only listen to local radio stations during the day. Right? Wrong!

According to Nielsen, 49% of local consumers listen to Detroit radio stations each week between 7:00pm and 12:00am. This is a larger audience than Pandora, Spotify, and Instagram combined reach during an entire week.

The most expensive time for a business owner to advertise on Detroit Radio is weekdays between 6:00am and 7:00pm. This is generally referred to as radio's prime-time.  It is also the time when the demand to buy commercials is highest.

Once 7:00pm rolls around, however, the demand to buy commercials drops. So does the cost.  Sometimes by up to 75%. But, according to Nielsen, 60% of consumers who listen to Detroit radio during the day also listen at night. In other words, a budget-conscious advertiser can buy way more than half of the prime-time audience at one-quarter the price. 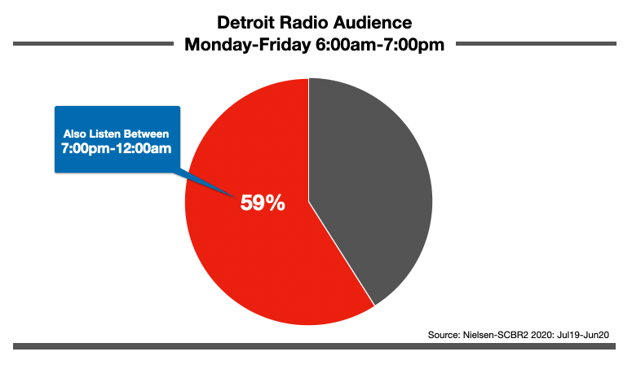 When local small business owners invest in nighttime advertising on Detroit radio, there is no denigration in the quality of the consumer reached. In some cases, the profile of the audience that listens  between 7:00pm and midnight will favor the more affluent demographics that advertisers covet.

This is true when comparing qualitative characteristics including, age, household income, and employment status. 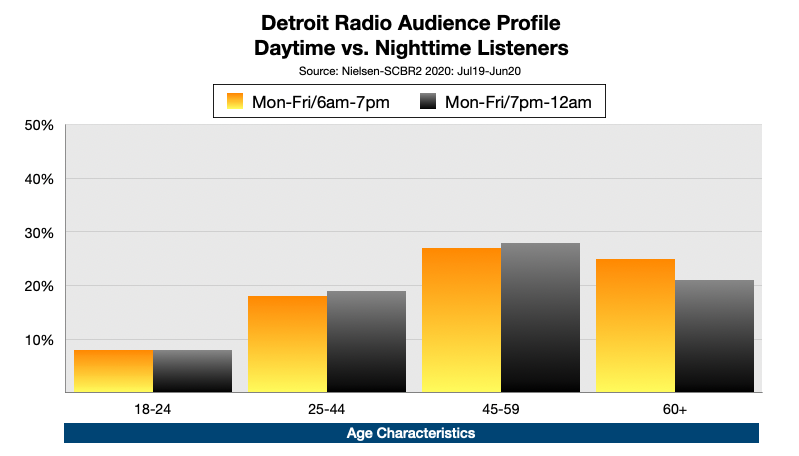 Advertising on Detroit radio at night might not reach the largest audience, but for small business owners with constrained marketing budgets, nighttime commercials provide extraordinary value compared to prime-time. Costs are considerably lower, and quality is unaffected.