How To Bring Employees Back To Your Detroit Small Business 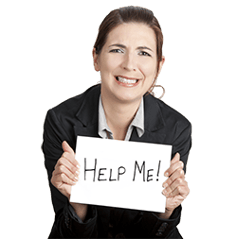 In January, Detroit small business owners were in a panic. The unemployment rate was at a record low 3.7%, and there were not enough workers to fill their open jobs.

As of today, though, Michigan is reporting that at least one-in-four of the state's workforce have lost their jobs for COVID-19 related reasons. Yet, many small business owners are still struggling to find employees.

According to The Wall Street Journal, "For some workers, unemployment benefits are now paying more than their old jobs did. For others, safety concerns or a lack of child care, as most schools and day-care centers remain closed, are making them hesitant to go back."

“That’s going to get in the way of any real recovery,” Douglas Holtz-Eakin, president of American Action Forum and former director of the Congressional Budget Office, told WSJ.

The struggle to hire employees creates an additional threat for those Southeast Michigan small business owners who received loans under the SBA's Paycheck Protection Program.

To qualify for the loan forgiveness provision of the PPP, business owners must restore its workforce to pre-Coronavirus levels. This must be accomplished within eight weeks of receiving the monies.

So, just like in January, local small business owners are under pressure to fill open jobs. Advertising on Detroit radio is a potent way to attract and hire the needed employees.

Before the onset of Coronavirus, significantly more employed adults were reached by Detroit radio every week than all other media including local TV, newspapers, social media, and even online job sites. 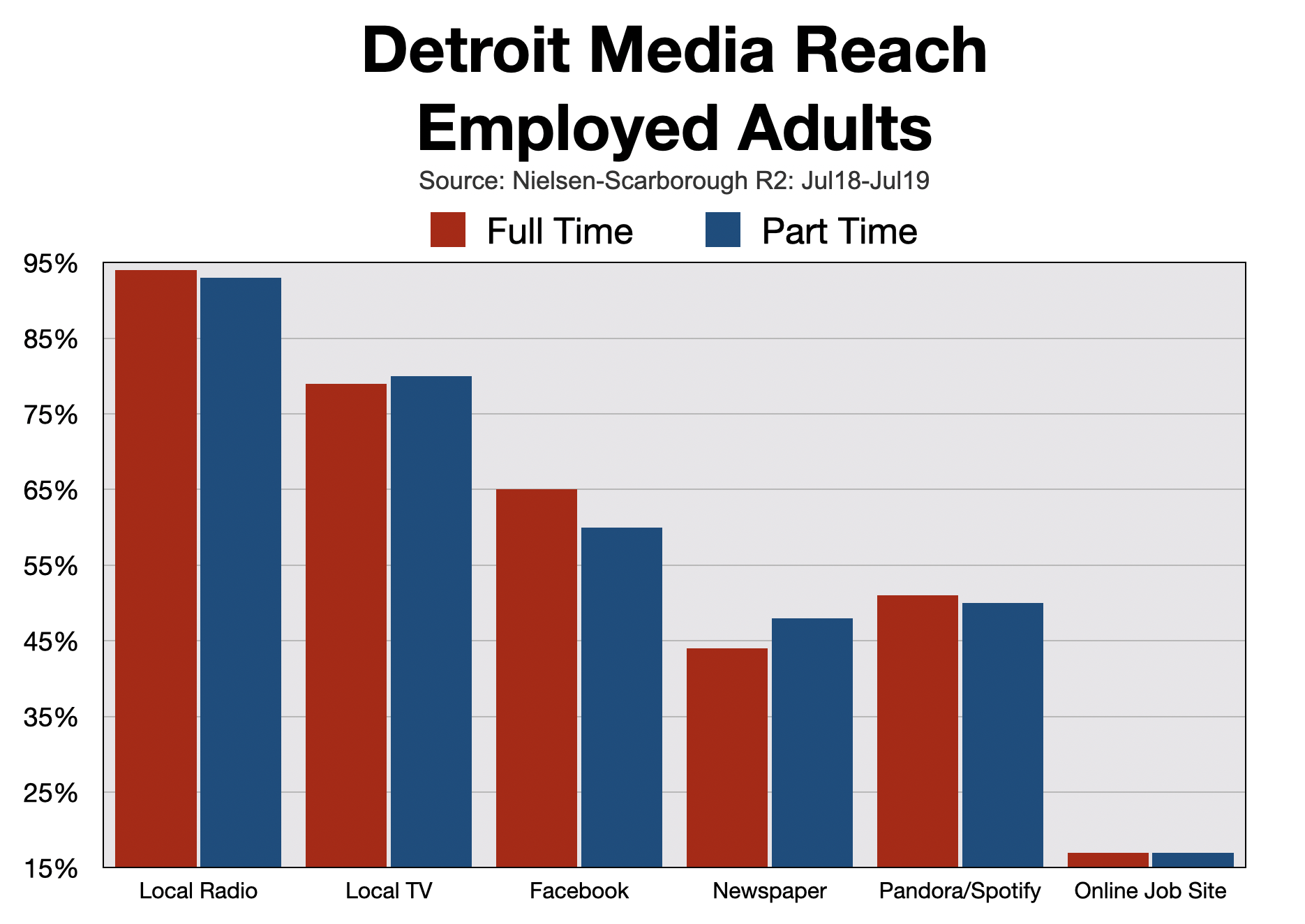 Research from Nielsen indicates that amidst the current Covid-19 crisis listening to local radio remains little changed. This means that displaced workers are still tuning-in.

In March, for instance, local radio achieved 96% of the same audience as it did in February, before the onset of the crisis. This trend has continued through May as well. Consumers still report they are listening to the same amount or more radio than they did prior to the chaos.

Regardless of the category of worker local small business owners need for rebuilding or for loan forgiveness, advertising on Detroit radio reaches more than all other media. The chart below represents pre-COVID numbers, but as previously shown, local radio maintained its audience during the crisis. 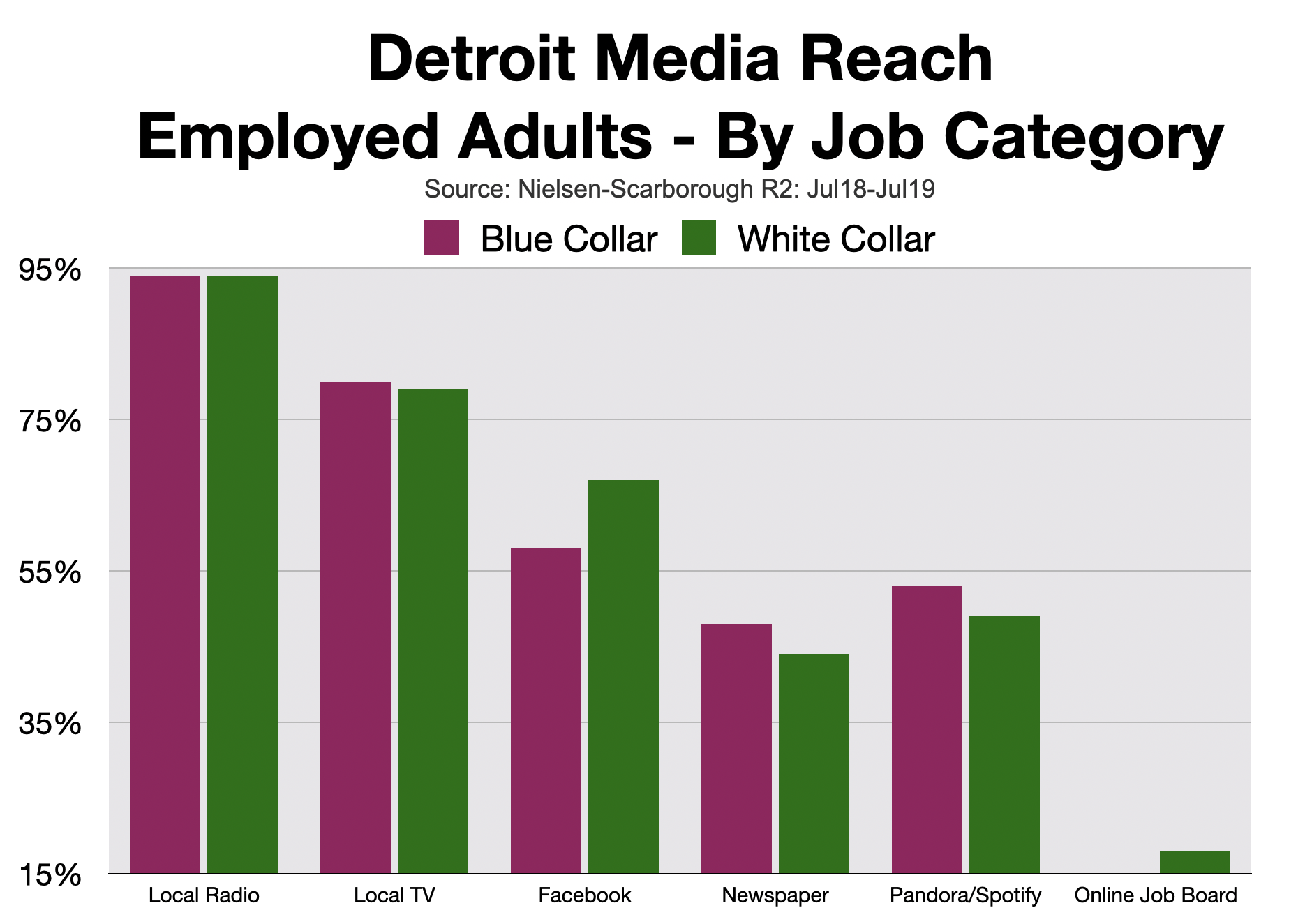 In addition to its mammoth reach, employment advertising on Detroit radio has several other advantages for small business owners pressured to hire and replace workers. These include:

But perhaps, the greatest benefit advertising on Detroit radio provides to employers is the ability to reach passive job seekers.

According to the Society For Human Resource Management, passive job seekers are "individuals who are currently employed and not actively looking for a new job, but who may be open to a good career opportunity if one came along."

Detroit radio reaches 94% of all passive job seekers every week. This is significantly more than are reached by online job sites, local TV, newspaper, social media, or streaming audio sites like Pandora and Spotify. 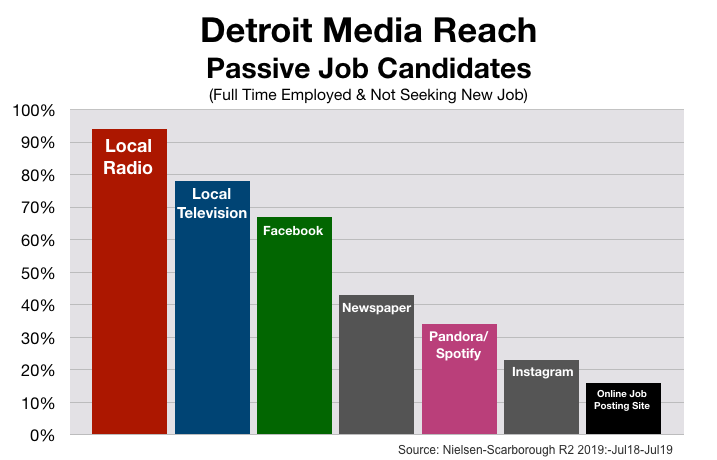 Small business owners need to act quickly to fill their open jobs. The ability to recover from the economic damage caused by COVID-19 depends on it.